On Friday 26th November the Island was treated to Storm Arwen. Saturday wasn't much better in terms of  gales and wind chill so we cancelled our work party. This morning I was keen to visit the reserve to see if it had suffered any storm damage. It was rather a bleak day with a hint of drizzle as I arrived. I'm pleased to say there were no trees down, although the gales had blown away two out of the three sacks left to protect the freshly laid slabs on Saturday. Even the planks used to weigh down the sacks had blown away! The sacks were in the stream making quite an effective dam. When I removed them a mini tsunami surged downstream! I also had to renew the warning tape on the bridge and collect up other windblown litter. By this time the hint of drizzle had become a steady downpour and I was pleased to seek refuge in the hide. Unfortunately my valiant efforts to tidy up the reserve were not rewarded by amazing sights of water fowl! The pond remained stubbornly empty! Shower over, the sky began to clear and there was even a hint of sun by the time I left. There was very little wildlife about during this 90 minute visit but I enjoyed having the cobwebs blown away after two days spent largely indoors.  Here is what I recorded:

SC209694 from a distance I saw 4 ducks fly in and land on the pond but they left again almost immediately. I was unable to identify them from that distance, even through binoculars.

I'm sorry there are no  wildlife photos this time, only views of the reserve.

At midday I headed home for a hot drink!

Today's work party was arranged at short notice in order to rake off the vegetation from the meadow area which had been cut yesterday by Tricia, the MWT Reserves Officer, and some of her mid-week Muckers. We at the Southern Group are very grateful to them for finding the time to fit in this task at Ballachurry amid all the other hard work that they do.

The reason we rake off the cut vegetation is so that it does not rot down and increase the fertility of the soil. Fertile soil = vigorous grasses and less wild flowers.It will take a long time to "tame" this meadow as it was once an arable field, no doubt with fertiliser added each year. But we shall get there in the end and each year sees an improvement in its biodiversity.

There was a good forecast today so we literally made hay while the sun shone. The "hay" went to the compost heap where it will rot down over the next 12 months, providing in the process a habitat for many invertebrates and also fungi. Unfortunately not many volunteers were available today at such short notice but four of us worked in relay. As one volunteer had to go home they handed over the baton, or rather the rake, to someone else who was just arriving.  Although the job is not finished we have "broken the back of it " and await another fine day to finish the task.


We were not the only people on the reserve today. Ian and Peter were also making the most of the fine weather to crack on with the boardwalk preparation. 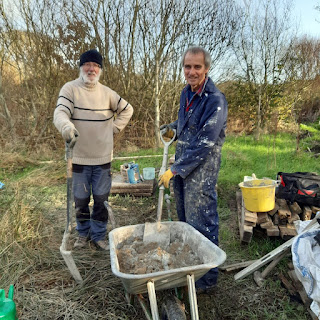 The two groups met up at 11.30 for a welcome cuppa and cake. I did take some photos but they seem to be a bit blurry so I've not included them here!

The work party was due to finish at 1 o'clock and right on cue a rainbow warned us that our time was nearly up. We were treated to a short hailstorm no less! It blew over in a couple of minutes and the blue sky returned as we collected up the tools and headed home for lunch.

Many thanks to both groups of volunteers today. Our numbers were few but we achieved a lot!

Each time we emptied a sack or the barrow a number of small creatures  remained behind. They were all  carefully returned either to the meadow or the compost heap, but not before being photographed for identification purposes.

Longtail in the stream by the bridge

I had hoped to return to the Reserve after lunch to do a proper recording visit but unfortunately it rained so I had to change my plans. At least the wet afternoon gave me chance to update the Blog!

I had to call in briefly at the Reserve on Monday so spent a few minutes in the hide and noted the following:

I  took this photo of the funnel fungus which is bigger each time I see it!

I was also interested to see how the work on the boardwalk preparation was progressing.  Many thanks to all those volunteers who helped Ian and Peter move the hardcore, slabs and timber on Saturday and made a start on the work itself. Especial thanks to Ian and Peter, of course, for all the hours they are putting in on this.

I returned yesterday morning (in the rain) to drop something off at the hide for the Reserves Officer who was hoping to cut the meadow that morning. I risked getting the phone camera wet to take these pictures of the concrete now covering the hardcore.

Several text messages then flew back and forth between myself and the Reserves Officer, Tricia,  during the course of the morning, updating her on the weather down south. I'm glad to say that the rain eventually stopped and she and some of her "Muckers" were able to cut the meadow.  But more of that in my next post!

I was at Ballachurry Reserve on Thursday quite early ( for me!) because I had an appointment at 1 o'clock and needed to have an early lunch first. I didn't start recording straight away though. First I went to look at the muddy area where the boardwalk used to be and mixed up some plaster of Paris to pour into the little footprints which covered the area. That done I had an hour to wait until it was fully set and I could remove the plaster casts as records of those creatures visiting the area when no one was about. I left some pretty hefty wellie prints behind in the mud myself! There was to be preliminary work done in the area next day towards the installation of the  new boardwalk so it seemed likely that the little footprints in the mud would be obliterated by those of the volunteers. It was now or never!

Here is what I recorded while waiting for the plaster to set and later :

and that was it, as far as birds were concerned! The previous Thursday at the same time I had recorded 16 or so species but one week later the reserve was eerily quiet.   The weather was sunnier than the previous week though so I did actually see a few invertebrates as I walked round.

SC208694 Hogweed in full flower - this particular plant is late flowering ( or is it early?) every year


I am grateful to Dawn Colley ( MWT Education Officer) & Sue Harvey ( Vetinary Surgeon) for  identifying the casts for me.

I returned to the reserve just before 4 p.m. to drop off something at the hide. Just as I was leaving I heard a rush of wings above me and realised that a mini murmuration of starlings had just flown over my head! I stayed on to watch them and, after circling several times, they eventually came down into the reed bed near the bridge. Here are a few photos of them to round off this Blog post. I did try to photograph them dropping down into the reeds but the picture is completely blurred unfortunately! 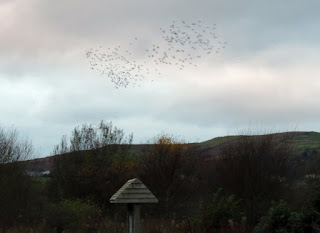 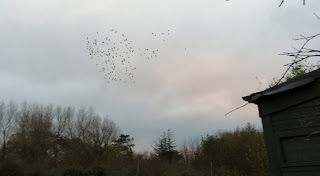 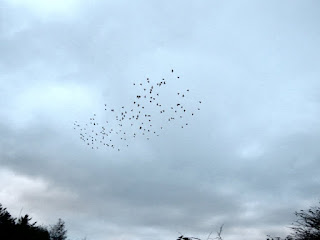 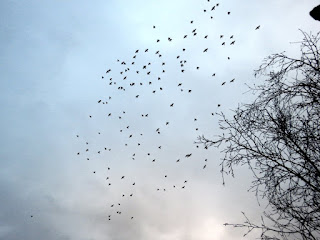 an interesting end to my Thursday visits.